Founded in 1964, the South Carolina Philharmonic Youth Orchestra offers an exceptional orchestral playing experience for young musicians throughout the state.
Each year more than 200 students participate in our four orchestras, comprised of the very best student musicians. Membership in the SCPYO program is open to students throughout the state, ages 8 through high school, on an auditioned basis.
Youth Orchestras rehearsals are on Sunday afternoons for 90 minutes to 2 hours with performances at the Koger Center of the Arts every year. 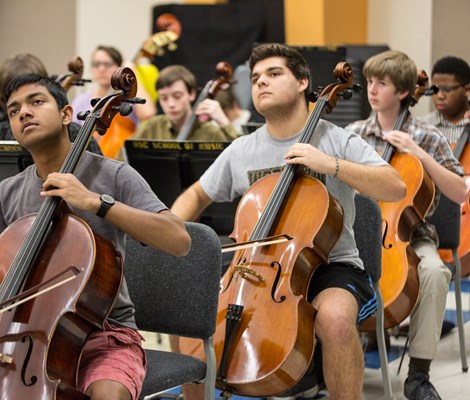 Due to the increasing number of infections of COVID-19 the SCPYO has implemented additional safety procedures as well as temporary rehearsal changes to mitigate the spread of COVID-19.

Location: Koger Center for the Arts

Location: Koger Center for the Arts

The SCPYO is made up of four orchestras of increasing technical ability, beginning with the Prelude Orchestra, and rising in age and ability levels through the Concert, Symphonic, and Youth Philharmonic orchestras.

The Youth Philharmonic is the SCPYO's most advanced full orchestra for musicians with 6+ years playing experience. They perform professional-level repertoire and occasionally side-by-side the South Carolina Philharmonic.

The Youth Philharmonic meets from 3:00 to 5:00 pm at the UofSC School of Music.

Auditionees for the Youth Philharmonic group will be required to sight read in the audition.

Neil Casey is the assistant director of orchestras at the University of South Carolina, as well as the Music Director of the South Carolina Philharmonic Youth Orchestras.  At USC, he teaches conducting, violin, chamber music, conducts Opera at USC and the USC Campus Orchestra, an ensemble that he created. Previously, Mr. Casey was the assistant conductor of the Augusta (Ga.) Symphony, Conductor of the Armstrong Atlantic Youth Orchestra (Savannah, Ga.), and a faculty member at the Conductors Institute in Columbia and the Opera Master Classes in Charleston, South Carolina as part of Piccolo Spoleto.

Passionate for opera, Neil has appeared with the Augusta Opera and conducted Claflin University’s Celebration of Black Pioneers in the field of opera featuring renowned soprano, Leona Mitchell.  In his post as conductor of Opera at USC, Maestro Casey has led performances of over 20 different productions. In January of 2002, he was appointed to the position of Assistant Conductor of the American Music Theatre for a television production of Robert Ward’s Roman Fever. Mr. Casey is also the conductor on several cd’s featuring operas by Robert Bradshaw with the Palmetto Camerata on the Beauport Press Label.  During the 2011-2012 season, Maestro Casey made his debut with the Western Plain’s Opera for productions of Leoncavallo’s I Pagliacci and Puccini’s Gianni Schicchi.

Committed to education, this year marks Neil’s fifth season as Music Director/Conductor of the South Carolina Philharmonic Youth Orchestras, where a fourth orchestra has just been created. Neil earned both his B.M. in music education and violin performance, and his M.M. in orchestral conducting from the University of South Carolina, where he was the recipient of the 1997 Van Doren Award (awarded to the Most Outstanding Graduating Senior/Music Ed Track).

The Symphonic Orchestra is the SCPYO’s intermediate full orchestra for musicians with 5-6 years playing experience. It performs unabridged pieces of standard orchestral repertoire, as well as some advanced level arrangements.

The Symphonic Orchestra meets from 1:15 to 2:45 pm at the UofSC School of Music.

Music excerpts to prepare for your audition

Nathan Tucker holds a Bachelor of Music in Education and Masters of Music in Conducting from the University of Alabama School of Music and is a doctoral conducting student of Scott Weiss at the University of South Carolina School of Music. He has conducted with Chamber Music Charleston and the ensemble Atlas. He also served as the Principal horn of the Gadsden Symphony Orchestra in Gadsden, AL for five years, and has performed professionally with many orchestras throughout the Southeast.

As an educational leader, he has served on the Executive Board of the Alabama Music Educators Association and presented as a clinician at the South Carolina Music Educators Association Annual Conference. He has been selected for fellowships in the The Los Angeles Conductors Workshop, The Cabrillo Festival of New Music Conductors Workshop, and The Bassi Brugnatelli International Conducting and Singing Symposium. He has also been selected for additional conducting studies at the University of Michigan and Michigan State University.

Tucker has two young boys, Will and Gabriel, where the majority of his free time is spent. In the unusual event there is other time (and money!) available, he enjoys traveling to new camping and hiking spots and working on his yard.

The Concert Orchestra meets from 3:15 to 4:45 pm at the UofSC School of Music.

Joanne Giovanelli is in her tenth year of teaching orchestra in Lexington Richland School District Five. She previously taught at Dutch Fork Middle School for eight years, and is now currently teaching at CrossRoads Intermediate School. Mrs. Giovanelli attended the University of South Carolina, where she received a Performance Certificate in Cello Performance, and a Bachelor of Music degree with an emphasis in Music Education. She continued her education at Columbia College. There, she received a Master of Education in Divergent Learning. Under Mrs. Giovanelli's direction, the orchestras participated each year in the SCMEA Concert Performance Assessment and have received "superior" ratings. In addition, Mrs. Giovanelli's orchestras have received "superior" ratings in regional competitions. In 2015 and 2019, the Dutch Fork Middle School Honors Orchestra performed at the SCMEA annual conference held at the Columbia Metropolitan Convention Center.

Mrs. Giovanelli is an active member of NAfME, SCMEA, and ASTA. She has served as a guest clinician, conductor, and adjudicator for multiple districts and regions across the Southeast. In addition to teaching, Mrs. Giovanelli is a freelance cellist. She resides in Chapin, South Carolina with her husband Robert Giovanelli and her dogs, Rimba and Bongo, and her cats Tom-Tom and Caxixi.

The Prelude Orchestra is an advanced beginner string ensemble comprised of string players with at least one year of playing experience. This group is ideal for beginner students wanting an additional challenge, or for Suzuki/private lesson students looking for a first-time orchestra experience.

The Prelude Orchestra meets from 1:30 to 3:00 pm at the UofSC School of Music.

Students auditioning for the Prelude Orchestra are to prepare a solo piece of their choice that will showcase your technique, musicality, and overall playing ability and a one octave major scale. More information is located on the String Audition Information Sheet.

Emma Brown is currently a viola and violin teacher at the Suzuki Academy of Columbia. She started her musical training on the violin at the age of seven in the Suzuki method and discovered her love for the viola in high school. Emma received her Bachelor's degree in Music Education from Ithaca College in Ithaca, NY and her Master's degree in Violin and Viola Pedagogy from the University of South Carolina, during which she served the Assistant Director of the University of South Carolina String Project under the direction of Dr. Gail V. Barnes.

Prior to moving to South Carolina in 2018 she served as the Assistant Director and master teacher for the SOAR (Strings Off and Running) program at St. Mary’s School in Cortland, NY in addition to maintaining a private teaching studio and performing with the Catskill Symphony and Clinton Symphony Orchestras. Emma has also completed Suzuki teacher training with Carrie Reuning-Hummel (Every Child Can) and Amanda Schubert (Violin Book 1).

Auditions for the SCPYO are held in the Spring. Auditions may be held in the Fall, but by instrument need only, so it is best to audition early!

The spring auditions for the 2022/2023 season are scheduled for the following dates. Click here to be notified when sign-ups go live.

Membership in the Youth Orchestra program is open to students throughout the state ages eight through high school, on an auditioned basis. Membership requirements include:

Tuition for the entire year is $220 for the first participating member of each family. Additional participants from the same family will each pay a fee of $170.

If you are joining in after our first concert, the pricing is listed below:

If you have any questions or concerns not addressed on this webpage, please contact us at scpyo@scphilharmonic.com.

Children 17 and under receive half-price concert tickets to all Masterworks Series concerts.

Our Adopt-a-Musician program brings South Carolina’s finest musicians into schools in order to talk about their musical lives, engage in musical discussions, share a live performance, and collaborate with teachers and students.